Missy Mazzoli is no longer “the 21st century insurgent of new classical music,” as NPR proclaimed in 2018. She is now firmly inside the seemingly insoluble fortress – an acclaimed composer whose works are commissioned and performed by major ensembles around the world.

During the concert, the May Festival Chorus will also sing Mozart’s “Mass in C minor”.

“It’s the first orchestral piece I’ve written with the violin specifically in mind,” Mazzoli said. CityBeatalthough it has several works for solo violin, including a fanfare commissioned from the solo violin of CSO Stefani Matsuo.

Mazzoli’s concerto is also the latest in a series of collaborations with Koh, which began in 2010 when Koh asked Mazzoli to participate in his “Bach and Beyond” project, a program combining Bach’s Violin Sonatas and Partitas. with newly commissioned works referencing specific pieces by Bach. .

Mazzoli’s response was “Dissolve, O My Heart”, commissioned by the Los Angeles Philharmonic, based on Bach’s “Chaconne from the Partita in D Minor”. Mazzoli writes on her website that while the task was “utterly terrifying,” she was inspired by Koh’s approach to Bach through the prism of contemporary music.

Over the past decade, Mazzoli has written several short solo pieces for Koh. Most recently, she wrote “Hail, Horrors, Hail,” commissioned by ARCO Group – Koh’s nonprofit for classical music inclusivity – in response to the COVID-19 isolation, as well than the 2020 “Alone Together” series.

A violin concerto seemed like the obvious next step, but Mazzoli says the composition evolved over years of discussion, shared coffee and Chinese food.

Speaking from his apartment in Brooklyn, Mazzoli says conversations started with what form a concerto would take.

“I asked Jen what her role was like when she stood in front of an orchestra in a dramatic sense. And over the years, an idea started to take shape,” she says.

Mazzoli and Koh continued to scrutinize the form of the concerto itself, questioning the role of the soloist, and gradually the concerto began to develop. At this point, the composition was purely an independent project, and Mazzoli credits both her and Koh’s management with helping to secure the CSO and the National Symphony as co-curators. 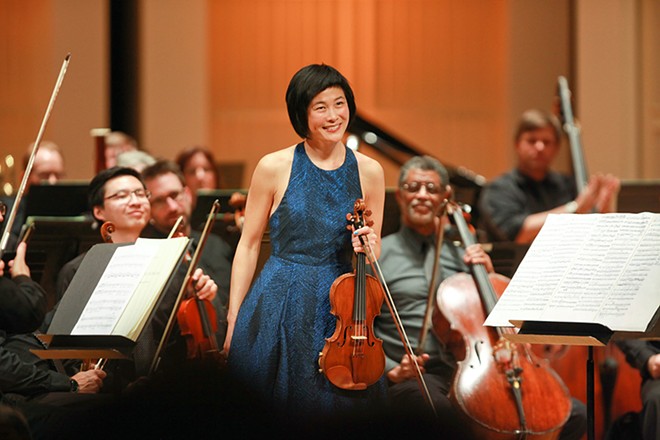 Violinist Jennifer Koh performs alongside the Cincinnati Symphony Orchestra in 2016

Attendees should not expect to hear a conventional concerto with elaborate themes, variations and cadenzas and orchestral accompaniment.

“Missy’s work raises the question of whether the soloist is leading the orchestra or within the ensemble,” says Koh. “It’s a musical questioning that is communicated in a very musical way.”

Although “Violin Concerto (Procession)” is purely instrumental, Mazzoli’s operatic work is powerfully influential. She says “creating a mini-drama for each move” helped her structure.

“A concerto has an interesting relationship between one and multiple, and that suggests a lot of dramatic scenarios,” Mazzoli says. “The soloist can lead and guide the orchestra through something or be in opposition to them, or the orchestra can engulf the soloist.”

“Each move took one of those relationships and explored it to its ridiculous end,” she continues with a laugh. “It’s not absurd at all. It’s not a funny piece, just in an extreme way.

The opening movement, “Procession in a Spiral,” has the soloist taking the spiral to extremes, says Mazzoli. “The movement begins with this spiral with a wide scale that collapses in on itself until we end up with the solo violinist at the end of the movement.”

The second movement is inspired by the neurological condition known as St. Vitus’ dance, in which the victim’s muscle groups move irregularly or involuntarily. “The violinist leads the orchestra through this manic dance, speeding up in a tempo that is almost impossible to play,” explains Mazzoli.

The concerto ends with another procession, this time ascending “to heaven or to infinity”, she says.

Mazzoli and Koh had a unique opportunity to study the concerto at the Juilliard School, where Koh serves as a creative partner. Koh, a longtime advocate for new works, says the workshop sessions have been eye-opening for performers and composition students.

“There’s an incredible trust between Missy and me, and they understood that. It was important for the kids to see how the best collaborative processes unfold,” says Koh. “A lot of ideas were coming and going.”

Both accomplished artists bring perspectives as people who have led ensembles and performers. And for both, collaboration is essential.

“I tell composers that as violinists, we spend our lives learning the standard rep, but we perform them in new ways,” Koh says. “Missy and I are specialists and have a great knowledge of what’s complicated and what works, both in terms of composition and the actors involved.”

Koh’s last performance with the CSO was in 2016 and she can’t wait to return. Mazzoli will be in the audience for the show, but his music made its CSO debut in 2020, with “Fanfare for the Unimpressed” for the Orchestra’s Fanfare Project, an initiative that has commissioned more than a dozen composers to write works for solo instruments.

One of Mazzoli’s childhood dreams came true when his hometown’s Philadelphia Orchestra, conducted by Yannick Nezét-Séguin, performed his haunting, dreamlike “Sinfonia (for Orbiting Spheres)” in December — a piece also performed by the Los Angeles Philharmonic, the New York Philharmonic and during the BBC Proms series at the Royal Albert Hall in London.

“I didn’t realize what it meant to me until I got on stage with the musicians,” says Mazzoli. “It’s exciting, really a dream. I am grateful that the work can exist in many different environments, in multiple spaces.

And now, Mazzoli is ready to experience the performance of her “Violin Concerto (Procession)” at Cincinnati Music Hall.

“Hearing my music performed is really an out of body experience. I’m always listening to what I can improve on during rehearsals. But during the gig, I try to let it wash over me,” she says.

“I really like that tension of hearing it in front of an audience and not knowing what they’re going to think or how it’s going to turn out.”

Send CityBeat a news or story tip or submit a calendar event.

The madness of the violin | Cinematic threat

Maintaining a relationship with someone with bipolar disorder can be difficult, to say the least. These issues are fully exposed in Sergei Safiullin’s documentary profile on San Francisco street musician Ben Barnes, The madness of the violin. As a child, Barnes showed a keen interest in the violin. His dedication and aptitude for playing the […]